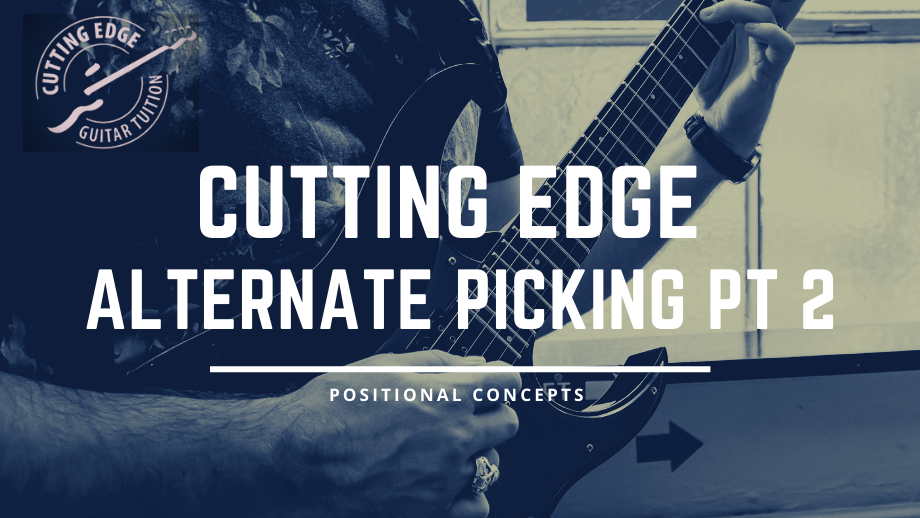 In part 1 of this miniseries, we looked at playing alternate picked scale fragments to bed in this technique on a single string. Next, we expanded this by taking those fragments along the length of an entire string using the A natural minor scale. The focus of the previous lesson was to learn the alternate motion (down followed by up) while learning the correct grip of the pick, wrist action and forearm placement. If you are still stuck on these or haven't been getting the desired results, go back to the supporting video so you can watch exactly how my picking action works. If you feel you need to hone in more on the foundations of this technique, I outlined all of this in the first book of my High Intensity Guitar Technique series, which also includes some handy video tutorials that zoom in and show you the real basics of this technique.

Perfecting techniques such as this require you to have a complete mastery at slow speeds. Generally speaking, guitarists are always keen to speed up, but by sticking with these examples at slow speeds and truly allowing your mind and body to connect with the technique, you will be able to play faster with more precision. One argument many players have with this, is that super shredder Shawn Lane used to say that he never really played things slowly, he just played them fast and sloppy, and with practice, he would gradually clean them up. Guthrie Govan also states that he never had the discipline to work with a metronome, but would build speed over time by gradually speeding up as he felt comfortable.

These methods worked for these two giants of guitar, but I would suggest a disciplined approach will yield results for most students. When listening to players like these, you have to bear in mind that they have an immense natural talent that not everyone will be able to utilize, however, with a disciplined approach, absolutely every guitarist can improve. A disciplined approach where you practice slowly, working on your tone, timing, and precise execution of each exercise and gradually building speed with a metronome will yield results, in much the same way that an athlete trains in a gym. If you work progressively, results will come and remember that speed is a by-product of accuracy and immaculate timing.

Another point worth noting is that although there are some advisable ways to hold a pick and execute these examples, not every great guitarist does everything the same way, so it is worth experimenting with a few different grips, and positions of attack along the length of a string to see where you get the best tone and feel. Youtube is an excellent resource in the modern era, which allows you to watch live footage of almost any guitarist you like. Watch these videos and see how your idols do it, copy their pick angle, copy their stance. If a player looks good when they are playing, then their technique probably is good. My favourite alternate picker when I was learning this style was Paul Gilbert.

I was always fascinated by the way he held his pick and just the way he looked when executing his face frying runs. I always thought his playing style looked so elegant, tidy and precise, and surprise surprise, his technique is fantastic. In this tutorial, we are focusing on crossing strings with alternate picking, first by playing small fragment positions and then taking the technique through full three notes per string shapes that span the width of the neck. In the accompanying video tutorial I will be explaining the differences between inside and outside the string picking, and how this affects the tone and feel for different players, so make sure you watch that to accompany the tab and explanations here.

The exercises presented in this tutorial are of extreme importance if you want to have a modern and cutting edge command of this fundamental guitar technique, so make sure you put plenty of work in to get them right. Once you are clean and comfortable with the technique, incorporate it into lots of your runs that can be used in your composed solos or during modern rock and fusion improvisations.

Example 1 shows a two-string fragment where the focus is on outside the string picking. The odd note nature of three notes per string means that you will play down, up, down on the lowest string, and then up, down, up on the higher string of the pair. We call this outside string playing, as the pick begins on top of the low string, and ends below the high string. You can see this executed clearly by watching the accompanying video. The exercise is shown in three octaves so you can get a feel for different string groups.

Example 2 shows the reverse motion of Example 1, so now focuses on inside string picking. Follow the pick directions in the example, starting on a downstroke, inside the high string, and ending on an upstroke, inside the low string.

Example 3 shows a sixteenth note fragment that we learned in the first part of the cutting edge legato series, except of course this time we are picking it. This one falls under the pick nicely as you are always moving in the direction of a new string, so there are no difficult outside the string changes.

Example 4 expands Example 3 by playing a sixteenth note figure over three strings. There is an exciting mix of inside and outside picking concepts in this one. Follow the pick directions in the notation and remember to keep to strict alternate motion. There is another method, which allows us to move in the direction of a new string each time which is called economy, speed, or sweep picking. We will study this in another lesson, so use a disciplined approach to alternate for now.

The next group of examples focus on one of the most famous alternate picking exercises of all time. This one comes from Uber shredder Paul Gilbert. Paul uses licks based on this picking style on almost every album he has played on, and it's a staple part of his unique style. He taught the ideas behind this style in his brilliant instructional videos Intense Rock. Example 5 shows the original idea with Paul’s famous outside string picking motion.

Example 6 uses the same notes and fingerings but rhythmically displaces the note on the downbeat. Doing this not only makes the lick sound different but also means you will now be using inside the string picking.

Examples 7 and 8 show two more fingerings for the same lick. Moving notes around the fretboard like this will challenge the picking hand to do lots of different things. If you can pick these exercises fluently with all the different fingerings, your picking is pretty good.

Examples 9 – 13 all focus on full scale shapes. The idea in the following examples is to take some of the patterns that we learned in part one of this series and take them through an entire position of three notes per string forms. All of these exercises are based on sextuplet rhythm patterns, as this rhythmic group forms the basis for almost every top player's technique arsenal when it comes to alternate picking. The three note per string nature of the scale forms we are using lends itself very well to sextuplet style playing.

Example 9 shows a pattern that doubles each string before moving on to the next. This exercise is relatively straight forward as the pick is moving in the same direction as your string changes.

Example 11 uses a pattern we looked at in part one of the series. Last time we played this pattern along the length of a string, but now we are taking it through a position. Being able to use patterns in this versatile way means you will be able to navigate the neck in multiple directions.

Example 13 is the final example of this lesson. What we are going to do in this one is take the Paul Gilbert string crossing idea through an entire scale form. The exercise is almost a combination of the first examples we looked at in this lesson with Gilbert's exercise. It's a very tricky run to perform so take your time, and make sure you watch the video to see exactly how I am executing it. I've also moved this one to a different position of A natural minor.

The thirteen examples in this lesson give you a challenging yet productive workout that if practised diligently, will yield excellent results with this technique. As always there is way more that you can do with them. In the available download i give you some practice tips showing you how to expand the examples.  The exercises in these routines are all used in my practice, and if you combine them with the ideas outlined in the PDF, they will keep you challenged and improving for years to come.

Download Cutting Edge Alternate Picking Part 2 with bonus features and start taking your Technique to the next level now!! It can be downloaded free of charge, but if you've enjoyed the lesson and want to help me find the time to create more lessons like these, you can pay what you want, name a fair price!! 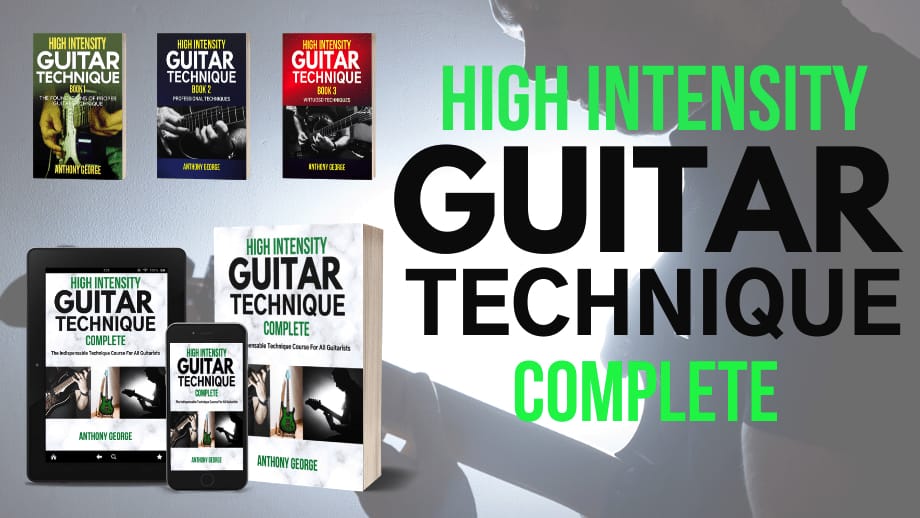 Still want to take your technique further? check out High Intensity Guitar Technique in the store. Click the image above.