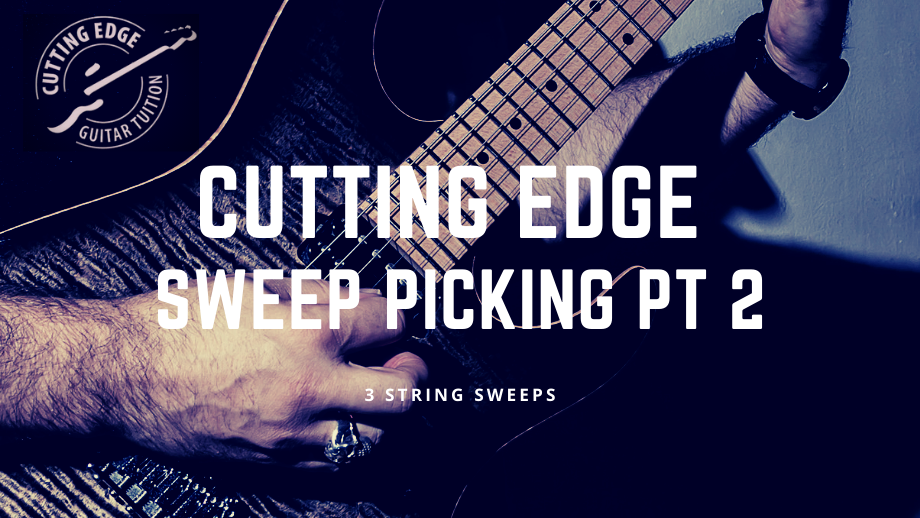 In this second lesson of the cutting edge sweep picking series, we will be looking at three-string sweeping. The following lesson is an excerpt from my book High Intensity Guitar Technique 2.  This particular style of sweeping is commonly associated with Swedish neoclassical rock player Yngwie Malmsteen, but don’t be put off by this technique if you don’t favour modern rock styles. The ideas presented here can be used in many different genres; for example, lots of fusion guitarists use sweep picking when they are superimposing arpeggios to get real nice jazzy licks.

I would recommend taking a listen to fusion players such as Frank Gambale, who is universally renowned as the father of modern sweep picking, and also YouTube phenomenon, Alex Hutchings. Both have a wonderful facility for this technique. Mastering three string sweeps and seeing how you can make the licks fit together is an essential building block to being able to create bigger licks over more strings, so we need to make sure we are very comfortable with three strings before moving on to more strings. Sweeping over more strings and larger arpeggio shapes is covered in the third lesson of this series. The art of sweeping is very difficult to master and may not feel natural for you to play in this way, but you must persevere to open up lots of musical possibilities. If you can do it and then decide that it’s not for you, that’s fine. I always maintain though that you should master a technique first before deciding that it’s not right for you. You wouldn’t want to miss out on playing some cool licks or have an incredible sound in your head that you can’t get onto the guitar, purely because you haven’t put in the required time to have the technique.

When you sweep arpeggios in an ascending manner, you must make sure that you push through the string you’re playing, so that the pick lands on the next string. In my guitar technique books, I used the analogy of park railings and a stick. If you drag a stick through park railings, it pings onto and lands on the next rail, before bending backwards and then pings onto the next again. Your pick should have the same movement on the strings, and try to make it do so when performing these licks.

On your descending licks, the pick needs to be dragged through the strings, once again, so it lands on the next string to be played. When sweeping through any arpeggio, the motion should be nice and fluid, so make sure there are no jerky movements of the wrist. One thing that will help is if you angle your wrist in the direction that you are moving. For example, when sweeping an ascending arpeggio, your wrist should be angled down, which will mean the pick is angled away from the strings, therefore creating less resistance. When playing descending, your wrist should be angled upwards for the same reasons. This kind of creates an imaginary figure of eight with the pick. Bear in mind that the fretting hand has much work to do with sweeping, although it’s predominantly a picking hand technique. Sometimes with sweeping, you have lots of rolling to do as one finger may need to fret several strings. This is hard to master and hard to sync up both hands correctly, so make sure you aren’t getting lots of horrible note bleed from improper fretting hand technique.

On any arpeggio types that don’t require you to use rolling, make sure you only have one finger on the fretboard at any one time. Otherwise, you will hear a chord sound rather than a single note arpeggio. If you have more than one finger on the fretboard at any one time with this technique, it sounds awful when there is much distortion coming from the amp, so be very aware that all of your muting and fretting hand accuracy is just as good as your picking hand technique. Below you will find the examples for this lesson, all of which are demonstrated on the youtube video at the top of the page.

Example 1 is a position one A minor triad sweeping lick across three strings. This is what we call a static lick, as you are just playing up and down the one inversion of the arpeggio. Follow the pick directions written in the example, and you will see there is an alternate picking motion on the top string, and then you sweep through the shape back to the top string where you alternate pick again. Later we will look at using a pull-off with this kind of idea.

Example 3 shows the position four A minor triad shape from the CAGED system. Once again this is another very common sweep shape but has the added difficulty of being quite stretchy in the fretting hand. Use fingers 4, 1, 2 then 3 for this lick.

Examples 4, 5 and 6 all show fingerings for G major arpeggios. So not only now will we have different shapes, as the major arpeggios have a major third as opposed to the minor triad’s minor third, but I’ve also written the major arpeggios with a pull-off on the top string. So far we have looked at using a bit of alternate picking combined with the sweep. This time you will pick the top string with an upstroke, pull-off to your next note of the arpeggio and then continue sweeping through. On the ascending version you will find that you sweep down, then reverse to an upstroke, pull-off then keep going. Both ways to play the arpeggios are valid, but I think once you have tried both, you should find whichever way suits you best and then stick with that. Example 4 shows position one G major.

Now that we have looked at all the common individual shapes for major and minor arpeggios in their three string guise, I would suggest that you need to spend a fair amount of time just playing up and down each one, gradually building your speed to higher tempos and making sure you have totally grasped where they all live on the neck. Once you are comfortable playing each shape technically and know where it is on the neck relative to the other shapes, you can begin looking at the next group of examples which link them together.

Example 7 then is an extended A minor arpeggio lick that combines shapes one, two and three. Linking the shapes in this way gives you much longer arpeggio phrases and is very reminiscent of the playing of neoclassical rockers such as Yngwie Malmsteen and Jason Becker. For this example, I have added an exit idea. I’ve used a bend with tone wide rock vibrato to sound stylistically accurate. An exit such as this makes this example go from being an exercise to an exciting neoclassical lick.

Example 8 shows how you would similarly connect the G major shapes.

For our last sweeping example of this lesson, I want to move slightly away from the rock side of things and look at how jazz and fusion guitarists can use arpeggios to get their sound. Technically how you play the arpeggios is fundamentally the same, it’s just the way that they are used that gives us different genre specifics. In our rock examples, we have been either playing one arpeggio in different inversions, or we have played the correct arpeggio that fits the underlying chord progression. Jazzers like to superimpose different or ‘wrong’ arpeggios over certain chords to get extended sounds and outline different modes or scales.

In Example 10, we are looking at using G and F major triads over a G7 chord to get a nice G Mixolydian modal sound. If you are unaware of modes, check out my Cutting Edge Guitar Scales tutorial, which will show you all of the relevant theory and scales fingerings you will need. This example is based on the player Frank Gambale. We will be looking at how he would superimpose the two different triads over the G7 to get this modal sound. He is, of course, the obvious choice for this technique as he invented economy picking (or as he calls it, ‘speed picking’), which is the scalar version of sweeping, and he is a terrifyingly good sweep picker. Check out Frank’s tunes ‘6.8 Shaker’ from the album Passages, and ‘Naughty Business’ from the album The Great Explorers for lots of scary technique and Mixolydian soloing.

My first impressions of these guitars will be going up on my YouTube channel at 3pm today. Check it out here… https://t.co/m5VVJcF1hd